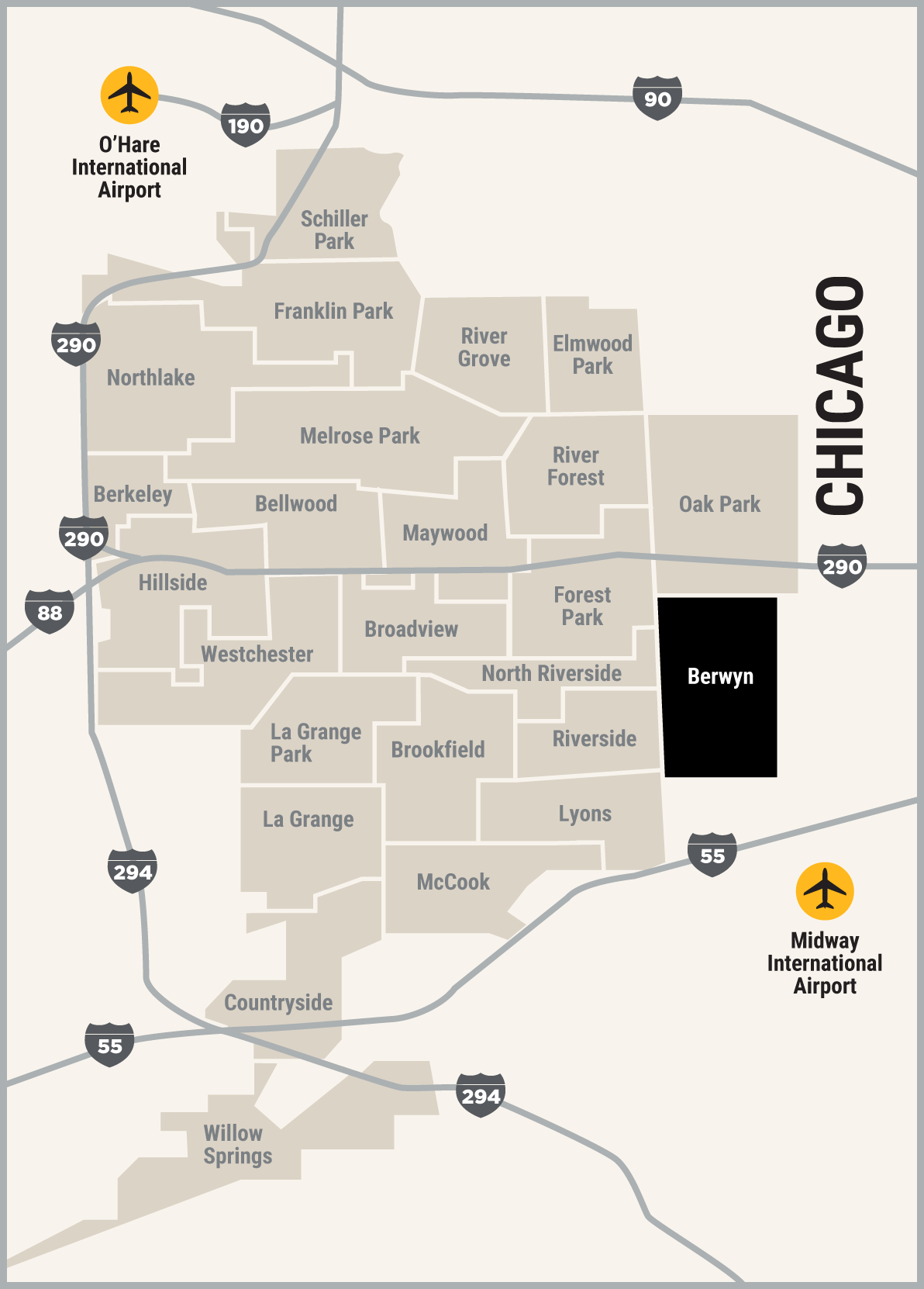 Berwyn deserves a top spot on your list of must-see Chicago suburbs, so make sure to give yourself extra time to savor all the unique, wonderful things you’ll find here.

Berwyn began as a strongly Eastern European enclave for many who moved from the big city of Chicago. It was a melting pot for Czechs and Bohemians, Swedes and Ukrainians, and the Latino community, followed more recently by young professionals and the LGBTQ community. Hard-working folk who built Chicago from a swamp into a world-class metropolis have given Berwyn the many flavors it has today. If you’re looking for fruit-filled kolaczki pastries, grilled Polish sausages, or the best Italian ices, you’ll find them all – and more – in Berwyn!

Head west from the Chicago Loop on I-290 or southwest on I-55 for just a few miles. Or hop on the Burlington line for the 20-minute ride from Chicago’s Union Station. Berwyn sits just west of Cicero, south of Oak Park, to the east of Riverside and the Brookfield Zoo, and north of Stickney. Your Berwyn route aligns along three major Chicago arteries:

Berwyn’s downtown Depot District thrums and vibes with those who call it home, with endearing claims to fame including being home to the world’s very first White Castle, serving sliders on Ogden Avenue since 1939.

It also enjoys a world-class reputation for its blocks-long stretches of Berwyn bungalows, the brick family homes built during the 1920s-1940s better known as Chicago bungalows. Homes for commuters were built literally by the thousands in the decades following World War I, making Berwyn for many years one of the fastest growing cities in the USA.

Berwyn today remains a popular place to raise families, who enjoy its proximity to the city delights of Chicago, only seven miles away, and great suburban destinations like The Brookfield Zoo and the historic, leafy suburbs of Oak Park and Riverside.

Still referred to as “Beautiful Berwyn,” it’s easy to see why with its vibrant restaurant and live entertainment corridors, tree-lined streets, sturdy brick bungalows, and Victorian "painted ladies," Berwyn is enjoying its second century even as it celebrates a rich, colorful history.